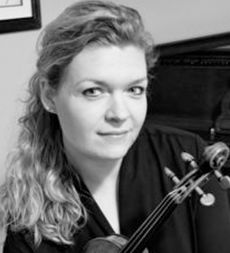 Violinist Elise Parker, a core member of the Minnesota Opera Orchestra since 2012, is an active part of the Twin Cities music scene. Ms. Parker also performs with the Jamison String Quartet, Minnesota Sinfonia, VocalEssence, Minneapolis Pops, Duluth Superior Symphony Orchestra, the American Composers Forum, Hennepin Theatre Trust, as well as recording and performing with the Guthrie Theater, STRINGenius, and the Children’s Theatre. The Star Tribune has described her playing as “soulful,” while the Pioneer Press wrote “Elise Parker wrings pure beauty from her violin.”

Elise began violin lessons at age 6 and graduated from the Augsburg University Suzuki Talent Education program. She also graduated from all ten levels of the Suzuki Association of Minnesota Statewide Graduation. Elise received a Bachelor’s degree in music performance from the University of Wisconsin-Madison on a School of Music scholarship. From there she attended Rice University, earning a Master’s degree and was the recipient of the Distinguished Fellowship of Violin Award. She has studied privately with Kathleen Winkler, Vartan Manoogian, Maseo Kawasaki, Naoko Tanaka, and Nancy Lokken. Her Suzuki training has been with several trainers including William Starr, John Kendall, Nancy Lokken, Mark Bjork, and Brian Lewis.

Elise has enjoyed completing the “Suzuki Triangle,” having now been a Suzuki student, teacher, and now Suzuki parent to her sons Calvin and Leo. In her free time she takes pleasure in walking her miniature poodle, Norman Allen Parker, around the many lakes and parks near her south Minneapolis home.

“Our program is unique because of its tight-knit community of students, parents, and teachers alike. It’s a supportive, nurturing environment, where everyone strives to support each other both musically and personally.”