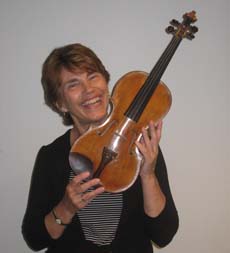 In addition to being the director for Augsburg University Suzuki Talent Education, Nancy Lokken is the founder and first President of the Suzuki Association of Minnesota and served on the board of the American String Teachers’ Association of Minnesota. She studied with Dr. Suzuki in Japan and is an active Clinician and Teacher Trainer at institutes, festivals and workshops throughout the United States, Canada, and Latin America, and also teaches Suzuki pedagogy as a registered Teacher Trainer with the Suzuki Association of the Americas.

She was the Coordinator of the 30th Anniversary Conference of the Suzuki Association of the Americas (SAA) in 2002, and served on the SAA Teacher Development Committees which developed the courses ECC!, “Every Child Can!, and SPA, “Suzuki Principals in Action.”

Ms. Lokken has taught in Bermuda, Canada, Spain, Japan, Mexico, Ecuador, Peru, Vienna and England. Her students have been recipients of numerous awards and recognitions, including performances with the Minnesota Orchestra and St. Paul Chamber Orchestra. AUSTE students were selected to perform in the International Ensembles Concert at the SAA Conference in 2004, and have toured and performed in Salzburg, Vienna, Prague, Mexico, Spain and England.

Ms. Lokken was honored by the American String Teachers Association with the award of Master Teacher for the state of Minnesota in 1998, and received the American Suzuki Institute Chair Award in 2012. In 2019 the Suzuki Association of Minnesota presented her with a Certificate of Appreciation with the naming of the “Nancy Lokken Summer Institute Scholarship,” to be awarded annually to a deserving student or teacher.

Ms. Lokken was a Suzuki parent to three children and is now a Suzuki grandparent.

“I am deeply appreciative of Dr. Suzuki’s contribution to music education and his philosophy that guides the teaching. Directing Augsburg University Suzuki Talent Education and watching the development of a caring community that nurtures excellence has been a privilege and a joy.”